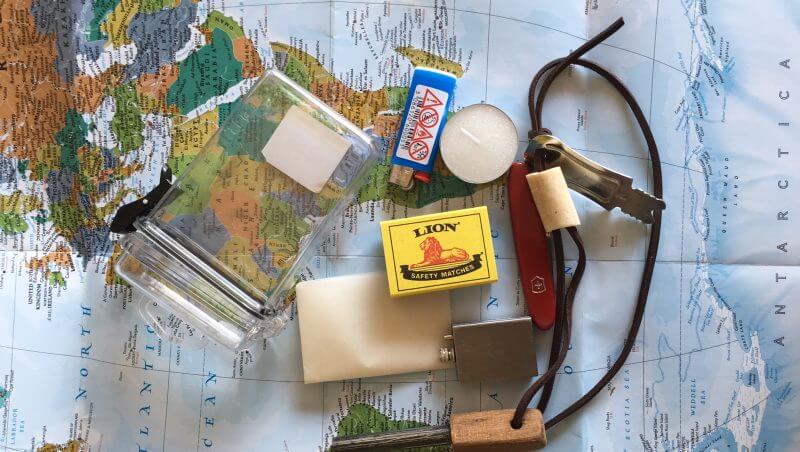 It’s alright getting to a local braai in the suburbs to find out that no one has matches or a lighter , one simply pops across to a convenience store at one of the service stations and buys the necessary.

However a recent occurrence a bit further afield eventually necessitated us lighting a gas cooker with a ferro rod and setting some thin twigs on fire to allow us to start the braai.

So necessity is the mother of invention , but I am not going to sit with a bow and twigs trying to light a fire like my ancestors. Prevention is however better than cure so I decided to come up with a firestarting kit with multiple options that may seem to be an overkill ,but could also be a bit of fun if children were around.

So I wanted some backups in case something failed , such as an empty lighter or damp matches, I also wanted to keep the kit compact,safe and fuss free.

Now you can make firelighters by putting meths in a plastic jar and adding either dry used tea bags or wine corks ,this works a treat but the meths is highly flammable and dangerous around fires especially if there are kiddies around.

One can also use cotton wool balls dipped into petroleum jelly or spirit jelly but they are a bit greasy and messy. So I decided to keep it simple;

Obviously the lighter and matches are the easiest  solution , they don’t perform that well in wet and windy conditions so the other options are a great backup.

This is a fairly safe little kit , I have avoided flammable liquids such as Benzine or Methylated Spirits but as if space permitted I would add a survival lighter, they work much as a ferrocerium rod but the striker has a wick and is kept in a solution of lighter fluid in the lighter body, it’s well sealed and a good backup.

Hints or tips? Please feel free to share on www.allterrain.co.za.

And lastly never forget to have fire extinguishers on hand around the campsite!