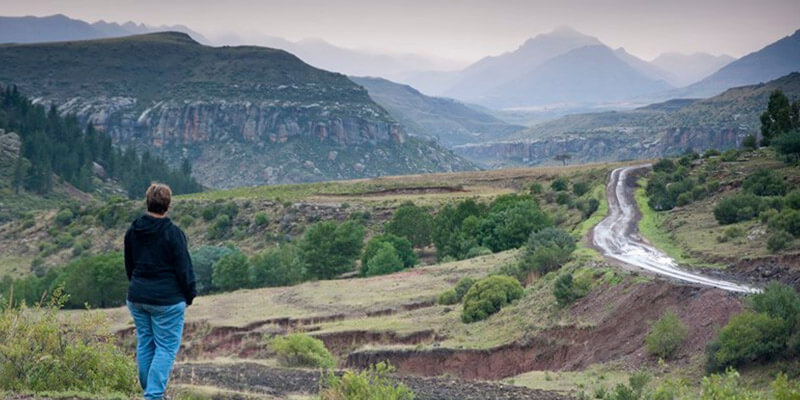 We drove to the Ganora Guest Farm just outside of Nieu Bethesda where we met sheep farmer turned fossil expert, Jan Steynberg.

“Cynodonts were the first mammal like creatures to exist, and as such, were very important in the grand scheme of things,” he told us from behind a glass cabinet in his little fossil museum next to his family farm house.

He was a tall, weather worn, white bearded man – a typical Boer by the looks of things – but he had a fascination and a great knowledge of ancient life and the earth’s many epochs.

In his rough and callused ‘working man’s’ hands, he held a small resin replica of an odd looking creature.

“This is a cynodont,” he told us. “Or rather should I say, this was a cynodont.”

We had already traipsed across his sheep farm in the Karoo where he had shownus actual fossils of giant therapsids, and we had brushed away sediments next to a river to find a toothsome leopard-like Gorgonopsid.

“These date back to around 300 million years ago,” he told me back at the museum. “Long before dinosaurs ruled the earth”.

On his tour of the farm, Jan had described what the landscape of his arid Karoo property would have looked like way back then.
“The Karoo was a swamp, a wet and humid place rather like todays Okavango Delta, but instead of elephants and lions, you would have found four legged dicynodonts with big tusks and Saber toothed gorgonopsids slinking in the shadows.”

You also would have found the diminutive little cynodonts. They lived in burrows and somehow survived the great Permian extinction; a global warming event that wiped out around 95% of all living things on the planet.

“They must have been very clever and resilient little creatures,” said Jan looking down at the little model in his hand. “To survive all of that.”

If cynodonts had not survived, if they had all been gobbled up by Gorgonopsids or succumbed to the droughts and starvation of the era, there would be no mammals in existence today.

No mammals: No humans!

“Thanks gramps,” I said to the little resin model. “We owe you one.”

During our weekend stay at the Ganora guest farm, Jan showed my family and I a whole plethora of fossils, all of which had been unearthed from his land, but although he had plenty of illustrations and miniature models of the creatures, I still couldn’t get a real feel for the size and power of some of the larger specimens.

“For that,” he told me, “you will need to visit the Kitching Fossil Exploration Center in Nieu Bethesda.” And so we did. And there we met Julius, a life-sized dicynodont who stood about a metre tall and had a physique akin to that of an oversized pit-bull terrier. Two dagger like tusks jutted out from beneath a tortoise-shaped beak, behind which were two beady eyes. If JuJu were real and not made from fiberglass there’d be enough musculature in that bulbous yet small-brained head to snap a fence post in half.

“And probably quite useful for defence, especially against one of these…” He pointed to a ferocious looking gorgonopsid standing next to the dicynodont. Sharp, curved teeth vied for space in its huge cavernous mouth. It was bigger and stronger than the dicynodont and lookeddecidedly dangerous and brutal. I decided to call him Jacob.

The Kitching Fossil centre (named after a prominent palaeontologist James Kitching) was a fitting place to end my travels back through time. The museum itself is fascinating and the guides are lively with their narration.
But it’s not just a public facility, for within its walls, there is still important fossil research going on, as Gerrit demonstrated when he showed me a recent find.

“This piece of rock contains a gorgonopsid fossil,” he told me whilst donning a pair of magnifying glasses. “And it will take about two years of very patient work to extract it.”

I decided to call him Jacob. Dale Morris

He went to work then, chiselling away at the stone with the help of a pneumatic dentist drill.

The tour, and my nationwide fossil adventure, ended with Gerrit and my family at a nearby shale bed where fossils are often found.

“Do you have what it takes to be a Palaeontologist?” he asked my kids, and then gave them instructions on what they should be looking for.

We scoured the rock faces and peered at pieces of stone through a magnifying glass until my son let up an exuberant whoop.

A small bone, clearly visible amongst flaky shale, stood out in sharp relief.

“That would likely be a cynodont,” he told us, “and it could be 300 million years old.”

Again, my kids were awed.

I had undertaken this fossil finding trip with the hopes that I would see giant dinosaurs that were mere millions of years old; the creatures I had grown up within my encyclopedias.

But instead, my family and I had travelled around 3500kms and gone back in time 300 million years, only to discover that the most fascinating of all ancient life forms were not Tyrannosaurus rex or velociraptorsbut rather a tiny little cynodont. The father of us all.

All the fossil sights visited in this story are open to the public.

Clarens has plenty of lodging and dining options for all budgets – visit www.clarenstourism.co.za and phone David Groenewald on 0834694703 to arrange a fossil tour.