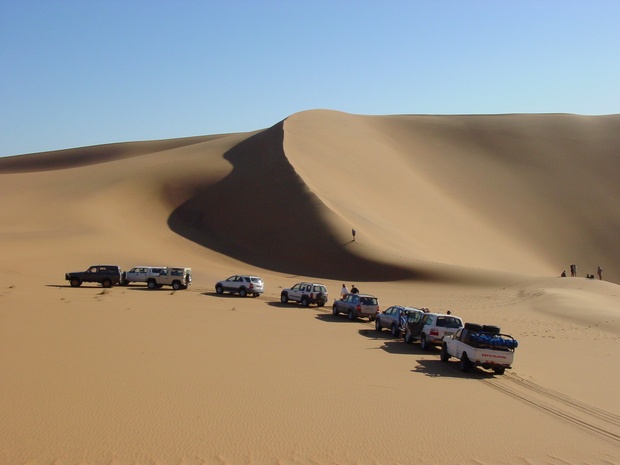 Discover the desert on our unique 4×4 desert tour from East to West across the Namib. The world’s oldest desert, world’s highest sand dunes, dune driving, adrenaline rushes, unique flora and fauna, off road desert camping and much more…

We assemble at Solitaire late afternoon. This is the time to get last minute supplies and fill fuel tanks to the brim. Remember you need fuel for six days. Since many group members may have been to Sossusvlei (one of the highlights of Namibia), a visit her is not included in our current itinerary. Tonight you will have the opportunity to meet guides and fellow travellers. After a detailed briefing of what to expect the next couple of days, you will be treated to a lovely meal around the campfire.

We depart from Solitaire and enter the Namib Nauklüft Park, 35kms north of town – restricted Namib area. This is the start of a unique adventure offering you aspects of the Namib seldom experienced by the “normal” tourist. We cross the Namib plains more or less on the same ox-wagon route followed by early settlers, German Schutztruppe (on horseback & camels) and ‘transport ryers’ in the late 1800s.

The route leads to the Kuiseb River. The landscape gradually changes from the typical Namib Plains into a colourful landscape of red sand dunes separated by grassy plains. The Kuiseb Canyon offers unique scenery. Its southern bank is formed by massive red sand dunes and northern bank by pitch black rock formations, while the riverbed itself is overgrown by massive endemic trees. The dry sand bed creates a kaleidoscope of green and white tones. We now proceed westwards along the edge of the canyon until we reach a spot were the dunes fall right into the river, near Homeb.

Depending on the status of the river (which may be in flood) we will ‘slip’ into the river enjoying its unique eco- system. This includes a variety of trees and an abundance of birds. We will cross over onto the northern bank of the Kuiseb Canyon, enjoying breathtaking views. On the northern side of the Kuiseb we will come across the southernmost examples of the Welwitschia mirabilis plant, endemic to the Namib Desert. Although the plant looks as if it has many leaves, it has only two, shredded by the wind over the course of centuries. The plant’s scientific names are a combination of the first European to describe it, a Slovenian botanist named Friedrich Welwitsch, and “Mirabilis” which comes from Latin and refers to its marvellous ability to survive in harsh, apparently waterless conditions.
The night is spent under the desert sky!

In the area between Conception Bay and Meob Bay the mining settlements of Holsatia, Charlottenfelder and Grillenberger were established during the heyday of diamond mining. No form of engine-driven transport was available during the first 15 years of exploration. Transporting supplies and mining equipment happened mainly by ship from Swakopmund or using the cutter, Viking, traveling via Sandwich Harbour, Conception and Meob Bays. Various shipping casualties occurred, such as when the Eduard Bohlen was stranded near Conception Bay in 1909. This rusty wraith is something exceptional to behold! During 1912/1913 a light railway from Conception Bay to Conception Water, and an 80-kilometer pipeline linking the settlements, were constructed. It is not clear how many pre-fabricated buildings were erected at the various settlements, as only the foundations of some of these are still visible today.

The exploration of Namibia by Europeans commenced from this coastline as early as 1485, although the inhospitable Namib Desert barred access to the interior. Probably the first European to set foot on Namibian soil was the Portuguese explorer, Diogo Cao or Diogo Cam, followed by Bartholomew Diaz two years later, on 8 December 1487. This date represented the holiday of “Maria’s Conception”. Therefore the bay received the name” Santa Maria da Conceicao” (Conception Bay). Today you will most likely see vast flocks of birds, drive past Cape Fur seal colonies, visit the wreck of the Eduard Bohlen near Conception Bay and see various relics dating back to the diamond mining era. In November 1914 all the people in this area were requested to stop operations and to proceed to Swakopmund. This order came as a result of an expected invasion of allied troops. This part of the journey is something history buffs will particularly enjoy…Keep a look out for wandering ghosts!
Tonight you will be camping in the Conception Bay area, either at “Leeukoppie” (Lion’s Head) or at “Conception Water” – depending on progress and/or weather).

The Namib Desert follows the coast of Namibia for approximately 2000 kilometres. It varies in width from 80 to 200 kilometres where it meets the Namib Escarpment. The most important climatic feature of the Namib Desert is its sparse and highly unpredictable annual rainfall which ranges from 5 mm in the west to about 85 mm along its eastern limits. Our aim with this trip is drive across the desert from east to west experiencing the dramatic change in the environment. From Homeb, we head southwest into the “sand sea”. On the way to Conception Bay massive dunes are negotiated. Once again ever-changing scenery and beautiful landscapes are enjoyed. Drivers’ skills are bound to be improving as the dunes offer greater and greater challenges. The dune straits are massive, and the dunes themselves even more impressive. Most are in excess of 150m high. We once again make camp amongst them, enjoying the unique thrill of desert camping.

The dune belt opens up between Meob Bay and Conception Bay, but immediately after Conception it stretches right onto the beach. From Conception Bay you will be driving on the beach. Scenery is truly magnificent. You will also experience driving freedom – BIG TIME!! We are heading northwards towards Sandwich Bay passing the wreck of the Shawnee and negotiating the famed Langewand where massive dunes come straight down into sea. There are only two or three places in the world to see this natural phenomenon. Due to the tides, there is only a very limited time span to negotiate this stretch of beach. After Langewand the trail once again leads into the dunes, circumnavigating the salt pan ‘extensions’ of Sandwich Harbour. The dunes are still getting progressively larger, offering drivers an ever-changing dune driving experience.

From Sandwich Harbour the trail enters the roller coaster, a series of massive ‘roaring’ slip faces, not only giving you a thrilling experience but also offering breathtaking views of the harbour and a panorama of sandscapes on the way to Walvis. The trip concludes over dinner at a restaurant in Walvis Bay. Accommodation for the last evening in Walvis Bay is included. The time has sadly come to say your good-byes to new friends made during this adventure of a lifetime.

MORE INFORMATION ABOUT THIS TOUR