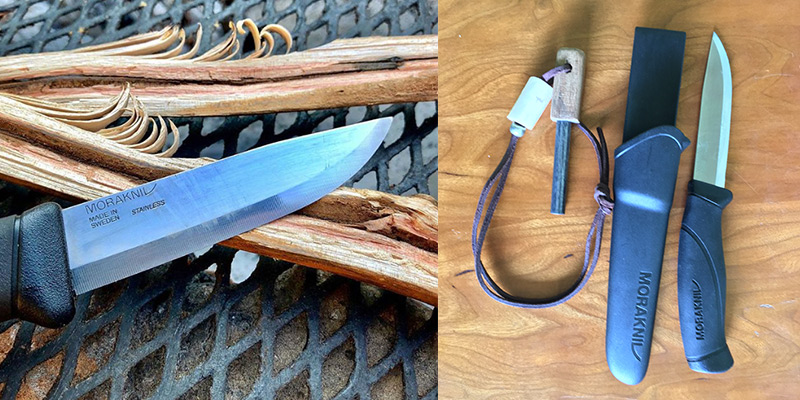 There is some “boy scout” in most of us.  When a friend described the technique of feathering to me it intrigued me as I am always keen to learn new methods of starting a fire.

To feather wood for tinder requires a good knife. There is much debate and controversy about what makes a good knife so for the exercise, we chose a Morakniv Companion a budget knife made in Sweden that really punches above its weight.

This Morakniv was amazing for carving the curls on our feather stick which we eventually used to start the fire.

So getting back to the feather stick AKA a fuzz stick – it’s a piece of wood shaved to produce a cluster of curls protruding from the wood in a feather-like shape. In this way you can even use damp wood to start a fire when dry tinder is not available, this method is popular amongst proponents of bushcraft and is believed to be a traditional method that has carried through the centuries.

A feather stick is made from dead “standing” wood, such as a branch that has not yet fallen to the ground, the first step will be to remove the bark and some outer layers to get to the drier centre core, this is then shaved with the knife to produce a cluster of curls – as many as possible. The finer you can get them the easier they will be to ignite. One can also use char cloth to quicken the process (a naturally combustible fabric). The combination will light easily using a ferry striker. You may need to blow on the combination to ignite it then the combination is used to get the kindling going and start the campfire. Even if you cut curls off the stick keep them and throw them on later

Feathering requires good knife control and safety your knife head should be in front of the hand holding the wood and the wood should be pointed away from your body if you feel the knife digging into the wood reduce the angle to allow you to get the curl of wood right. I personally also cut from the back of the stick to the front which means that I am unlikely to cut my curls off. My preference is to use the section of the blade closest to the handle as this also allows me to exert pressure on the blade with my thumb.

We did the exercise the other day as we had not been in the bush for a while and soon had a great fire going which in true South African tradition allowed us to break a few things and enjoy lunch in the veld.